It’s springtime & cleanup is going on. Be careful where you put
Your hands. They like dark spaces & woodpiles.  Also areas in the attic.

This guy was bitten by a Brown Recluse spider.

The following illustrates the progression of a brown recluse spider bite.
The affected skin actually dies on his body! Some of the pictures towards the end are pretty nasty, but take a look at the last one – it is a picture of the spider itself. 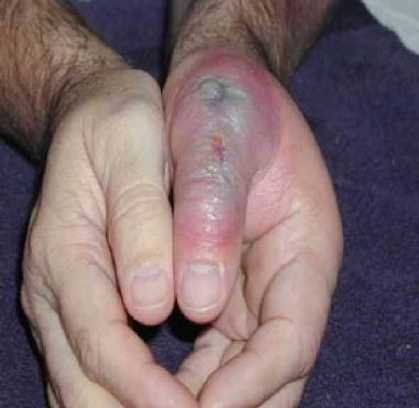 A person can die from it’s bite. We all should know what the Spider looks like……

The name “brown recluse” spider correctly refers only to the midwest species; additional species are known by common names such as the desert recluse, the Arizona recluse, etc. Unfortunately, non-arachnologists incorrectly lump them all under the “brown recluse” moniker. This is a potentially incorrect extrapolation because only the brown recluse has been intensively studied. All recluse species are probably capable of inflicting necrotizing bites, however, there may be behavioral and toxicological differences among the various species.

Two other spiders that have the potential to produce necrotizing wounds, though much less well-documented than the brown recluse, are the hobo spider and the yellow sac spider. The hobo spider (Tegenaria agrestis) may be found in the Pacific Northwest as far east as Montana and south into Oregon and Utah. The two yellow sac species (Cheiracanthium spp.) are found all over the United States, but probably only produce minor necrotic wounds. SPIDERS Spider Bites Gross