Some time ago, I highlighted the Vladi Worm, whose primary characteristic is the use of a condom. I had not tied it, but did go buy the materials…condoms. The pattern is usually depicted in pink. I sorted through a condom bin, much to the counter guys interest. I didn’t try to explain. I found red, orange, dark green, yellow and black.  I bought the squishy little packets and tucked them away. I decided to try tying the ‘pattern’ as I recalled it was not as easy to tie as one would think. It isn’t hard, but my observations will help you avoid my fumbles.

I selected a TMC 5263, a 2x heavy & 3x long, size 6 hook with a straight eye. I could probably leave well enough alone, but I did two things to the hook. I gently canted the point away from alignment beneath the shank to give it an offset look, then I gently put a slight bend in the shank about 1/3 of the way back from the eye.

I attached the thread (black…more about that later). It could be 3/0 to 8/0. Then I wrapped lead around the shank to give the fly enough weight to get down quickly.

I over wrapped the wrapped lead with thread wraps and added a coat of head cement. Then I worked the thread back to the bend of the hook. I then tied in a red copper ribbing (medium thick), a tuft of red marabou for a short, fluffy tail and a piece of red chenille (medium thick). 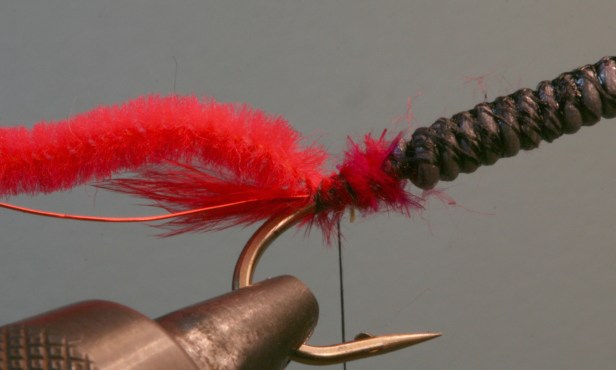 I took the red condom and removed the condom. There was no skimping on the lube. I recalled that the condom could be cut in half and then halved again. The rolled up rim is thick and not easy to cut with normal fly tying scissors. Use something heavier and careful as the lube makes the scissors slide a bit toward your fingers if not careful.

The condom, once cut, immediately straightens out and should be cut in half yet again.

This is a 1/4 section of the condom stretched out. The lube makes cutting through the latex a bit tedious as your fingers become slathered in the lube. This also was transferred to the marabou tail, which may have become minimized because of the lube. I had envisioned the marabou (front and rear) adding movement and a suggestion of life. Also, the 1/4 section of condom was more than enough for a size 6 hook. The quarter maybe should be trimmed even smaller for any smaller hooks.

I tied in the condom at the bend, where the red copper rib remained. I wound the condom up to the eye, back to the bend and again back up to the eye where it was tied off. A couple things were evident: the black thread was visible even after three layers of condom. Also, the wraps of chenille were possibly irregular so the condom filled the grooves and created a less than smooth surface. Consequently, when I attempted to wrap the red ribbing up the hook over the condom, the ribbing danced around a bit. Not an entirely bad look, considering it will be tumbling in rapids. Also, the black thread looks like some kind of markings. Not too bad.

Look at that pathetic little marabou tail, slathered in lube. The ribbing is a bit uneven, ok more than a bit. But that dark veiny look beneath is interesting. Something to keep in mind: when you pull the condom tight before securing it with thread wraps at the eye, remember the condom is under tension. If the thread wraps are not tight, the condom may snap out away from beneath the thread wrap from the tension. So, this my first effort. I am going to experiment with other colors too. Certainly not as good as the Vladi Worm (too chunky/plump?), but hey, that is fly tying. Incremental improvements.

Ok. another effort. Different bend to the hook, green comdom and olive green ribbing. Sparkle chenille base, which kind of shows through the wrapped condom. More slender profile and I put less lead on and toward the rear of the shank. Maybe a little better. Still a size 6 hook.